Why direct drive is being promoted?

It is useless to argue: well-known brands through commercials zealously praise their inverter protégés, comparing the endless advantages of modern machines with the disadvantages of traditional drive. The reason for praise is simple. the manufacturer is trying to promote a more expensive product and get ahead of the competition. But the impression that you get of the tricked-out models is not quite right, because they are not without their weaknesses, they break down and are not much better than the traditional ones.

Let’s begin our analysis by considering the “pluses” of automatic machines with a driven belt:

The main thing is that such models have been tested for decades of mostly trouble-free operation. Now for the disadvantages. These include the smaller tank size due to the need to fit the belt system inside the machine, as well as the increased noise level and regular replacement of the brushes and belt, which are constantly wearing out.

Advantages and disadvantages of both types of machines

The question of whether it is better to transmit rotation by belt or direct connection is still open. Models of both designs continue to coexist peacefully on store shelves, manufacturers do not hurry to adjust the model range, therefore, the choice is left to the buyer.

Advantages and disadvantages of belt transmission

The machines, in which the rotation of the drum is carried out thanks to the belt and pulleys, are a time-tested design. Over the years, manufacturers have developed optimal assembly technologies, which ensures:

It is also impossible not to mention the main advantage of such a scheme. the ease of repair. in the vast majority of cases, the breakdown of the washing machine drive is belt wear. Its price is extremely low, and the replacement can be done with your own hands literally for 20-30 minutes.

These are all pluses, and they are essential, but the belt also has disadvantages. Among other things:

Pros and cons of washing machines with direct drive

Models with a new type of transmission mechanism are actively promoted on the market. Experts in marketing spare no compliments, describing all the advantages of direct drive, eliminating belt transmission. Some of their statements are controversial, but in general, such devices do have a number of advantages. Among other things, it is impossible not to mention the following:

See also  How to change the thread in a sewing machine

Most manufacturers of such washing machines declare a ten-year warranty on the motor, that cannot fail to please customers, but this does not exclude the fact that during this period will fail any other part.

The pros of washing machines with direct drive look very weighty, but before making a final decision, it is worth considering the obvious disadvantages, alas, they too are. Those who are going to buy a washing machine of this type, it is necessary to consider the following disadvantages:

In order to understand clearly what makes one washing machine different from another, let us first remember how an ordinary washing machine is designed. Such an appliance has a traditional belt drive. This means that at the bottom of the body there is a motor that drives the drum through a pulley and drive belt. If you are even a little bit familiar with the device of the car, you will easily find the similarities.

The direct drive washing machine is constructed somewhat differently. Here the motor is “attached” directly to the drum. The belt and pulley in such a design are absent at all, and the motor and the tank are a single unit. On the one hand, it gives a number of advantages, but on the other hand, it is not without disadvantages, which also cannot be ignored.

Pluses and minuses of direct drive in washing machines

After a long evolution of washing machines, models with direct drive appeared on the market, which worked almost noiselessly compared to the previous ones, removing quality stains of different types and degrees of complexity from all fabrics.

Earlier washing machines had a belt drive, the price of such devices was low, the drum size was small enough, the service life was 10-15 years. With this mechanism, the drum is driven by a belt attached to the motor shaft and to the wheel. Because of the rather complex system, some parts are under serious strain and periodically need repair and specialist help.

Direct-drive machines function differently: the motor is located on the tank and is connected to the drum, t.е. it is not necessary to use a belt to move the drum. The absence of certain parts makes the components of the washing machine and the whole of it more durable and long-lasting, thanks to this, the service life of new equipment can exceed 10 years.

Direct drive washing machine pluses and minuses. The first advantage of this system is a noticeable difference in noise, which was a real breakthrough. But compared to the second, even such a significant factor goes away.

The quality of washing in machines with direct drive is striking. The ability to easily wash stains and dirt, with which other models could not cope, deserved due attention. 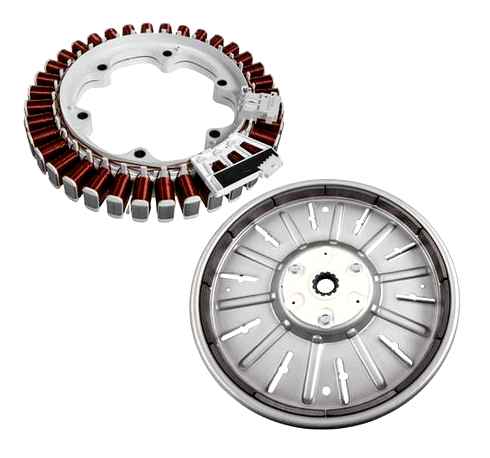 Thanks to a new engine and other innovations, the technique performs various commands quickly, such as: abrupt stop, start and reverse. It becomes possible to increase the speed of rotation of the drum, and thus wash denser fabrics at home.

Shorter washing time and energy savings become a decisive factor for a huge number of consumers.

Thanks to its design, the size of the drum can withstand more weight, which allows you to wash more things in a single session.

Such washing devices are easier to use and maintain, it is easier to determine which component is out of order and determine the breakdown.

The significant advantage of this model is its reliability and durability. Despite the existing features, questioning a number of advantages, the innovative technique surprises with its trouble-free operation for a long period of time.

The direct drive in the washing machine is clearly different from the previous one, because the variants with the other drive when overloaded burn the belt, and eventually lead to a breakdown, and thanks to the direct drive, just give an error and do not allow you to start washing.

Washing machines with direct drive have a number of drawbacks. For example, despite the many advantages and innovations, the washing machine itself is based on a regular one, the drum structure is absolutely the same as the belt-driven one. Because of the absence of certain significant elements, the motor is flooded with water when washing and can fail, leading to significant costs to repair it and other individual components.

In cases where the voltage in the network is unstable, the washing machine with a direct drive is not a reasonable solution and can lead to a number of unpleasant motor problems.

Distinctive features of the direct drive

Drive. the system of energy transfer from its source to the actuating mechanism.

In a conventional Cwm is the drive with belt transmission, the components of which are the belt and pulley. This has been the case since the invention of the washing machine with an electric motor. The motor is in the bottom of the body, the energy for rotation of the tank with water and laundry is transferred from it by the belt, put on a pulley, which is attached to the tank.

LG also uses the inverter principle in these motors, which makes them even more economical and durable. These designs include current frequency conversion. It should be noted that direct drive motor and inverter motor are different concepts. The latter can transmit energy also through the normal drive. Simply for Direct Drive, the inverter principle has proven to be one of the most optimal solutions, enhancing its useful properties.

The vertical-loading models are also equipped with Direct Drive generators. The principle of operation is the same.

See also  How to wash hollofiber in a washing machine 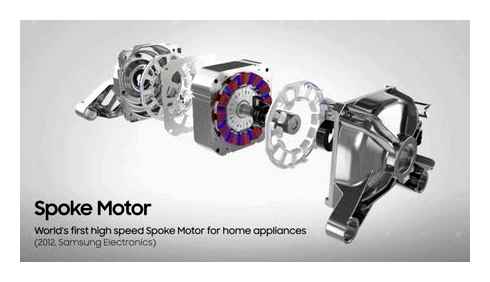 Such washing machines have their pros and cons. Let’s talk about the advantages first.

Overview of some models

Deserved reputation in the domestic market in the segment of washing machines with direct drive have South Korean brands Samsung, LG, and the German concern Bosch. The products of these companies are notable for their manufacturability and implementation of the most advanced technologies.

In Samsung units used EcoBubble washing technology, the essence of which is the use of foam generator, it mixes in the tank of washing powder, water and air, and the resulting foam penetrates deep into the fabric effectively removes dirt. Samsung also equips its units with the VoltControl system, which protects the machine from voltage fluctuations and withstands surges up to 400 volts, which is especially important for devices with inverter motors. In addition, the Samsung company provides a 10-year warranty on inverter motors.

The main feature of washing machines from the Korean company LG is the drive Invert Direct Drive c Technology Six Motion, which involves six different algorithms of drum rotation to achieve the best results of washing. Specialists LG also confident in the quality of their inverter motors and guarantee their failure-free work for ten years.

The German quality of Bosch has long been known to consumers of home appliances. The distinctive feature of washing machines Bosch has always been and remains high reliability, but also on implementation of innovations, Europeans do not lag behind their Asian competitors. Washing machines Bosch with direct drive equipped with EcoPerfect and SpeedPerfect technologies allow to reduce the power consumption costs, which is especially important at the time of permanent rise in energy prices.

Washing machines with direct drive and usual ones. what is the difference

The first to develop washing machines was the not unknown to us all company LG, which in addition to many interesting washing programs and additional functions patented direct drive.

But sometimes even such high-quality equipment can break down.