The main factor indicating compressor malfunction is the inability to provide the temperature set by the user. In addition, a characteristic noise emitted by the unit during operation may indicate a malfunction. The sound may not be too strong, but it is clearly audible during the operation of equipment.

Proceeding from the noise character you can define the type of compressor malfunction. So, if it makes clicking or grinding noises, the problem is most likely in the valves.

The malfunction is manifested by a sharp decrease in compressor performance and excessive heating of the air conditioner. The thermal relay eventually blocks the unit.

Another common problem is that the compressor stops working almost immediately after it is started. The device itself remains functional.

The cause of the malfunction is a shortage or excess of refrigerant. Unit operation is stopped by thermal relay. By the way, this element can also break.

It is not rare that compressor does not start after activation of split system. While all other components of the air conditioner are operating normally.

Even though the compressor does not appear to be defective, there is no reason to determine the cause. often the problem is in a breakage of starting capacitor which capacity is more than 10 uF.

In terms of restoring the efficiency of the unit, the most difficult problem is a short circuit of the drive motor. It is almost impossible to eliminate the problem, it is much easier to replace the defective compressor with a new one. It is worth to note that owners of modern models of air conditioners with sealed construction are very rarely faced with a short circuit.

After acquiring an air conditioner the first thing you should remember is regular maintenance and preventive maintenance of the whole system. It is necessary to clean regularly the outside block of the air conditioner from dirt and other damages. Insects getting inside the device can become the main reason of clogging and optimization of service life of split–system. Check the entire unit regularly to make sure that all components are functioning normally.

The simplest way to connect a motor is to connect it to a three-phase system. The motor windings are connected in two ways:

The connection order is indicated on the terminal cover on the back side.

Warning! Switching the windings in delta quickly drives the motor to its maximum power rating, but then the start-up current increases by a factor of seven. Soft start is difficult without a rheostat.

The star winding connection allows the motor to run steadily and for a long time with a soft start. The machine can withstand short-term overloads and does not overheat. The output is slightly lower than in the alternative connection.

Electrolytic capacitors have a negative and a positive electrode. As a rule, the negative electrode is identified by markings on the case (the white longitudinal stripe behind the “-” signs), and the positive terminal is not marked in any way. The exception is domestic capacitors, where, on the contrary, the positive terminal is marked with a “”. When replacing capacitors it is necessary to compare and check whether the polarity of the capacitor corresponds to the marking on the printed circuit board (circle where there is a hatched segment). By matching the minus line to the hatched segment you can insert the capacitor without fail. All that remains is to cut off the legs of the capacitor, treat the soldering points and solder them well. If to mistake polarity of connection, even the absolutely new and quite serviceable capacitor will simply rupture, smearing all neighboring components and printed-circuit board with conducting electrolyte.

Malfunction of the heat exchanger of the air conditioner outdoor unit

There are two ways to fix the leakage through the heat exchanger of the outdoor unit:

When replacing the condenser heat exchanger, air conditioning repair can take place on site and without additional disassembly work.

Main conditioner malfunctions and ways of their repair. how to solve the problems of home split-system

Modern split-systems are rather complicated devices, which functioning depends on several units. Breakdown of any of them leads if not to a complete failure of climatic equipment, then to inability to perform some of the basic functions.

Some malfunctions of air conditioners, which can be repaired without any special training, can be repaired by yourself, more complicated repair will be done in the service center.

Failure of capacitors in the circuit of the air conditioner compressor is not so rare. But why do we need a capacitor at all and what is it there for??

Household air conditioners of small power are mainly powered from 220 V single-phase network. The most widespread motors that are used in conditioners of such power are asynchronous motors with auxiliary winding, they are called two-phase motors or capacitor motors.

In such motors the two windings are wound in such a way that their magnetic poles are at an angle of 90 degrees. These windings differ from each other by the number of turns and nominal currents, respectively, and the internal resistance. But at the same time they are calculated so that in the work they have the same capacity.

See also  How to connect a split system Whirlpool

In a circuit of one of these windings, it is designated by manufacturers as starting capacitor, which is always in circuit. This capacitor is also called a phase-shift capacitor because it shifts the phase and creates a circular rotating magnetic field. The operating or main winding is connected directly to the mains.

Let’s look at the HVAC unit in part: as far as air conditioning is concerned.

Electrical scheme of outside unit of split-system HVAC

Foreign movies show boxes with a mesh top on the roofs, with a huge exhaust propeller spinning inside. The forced ventilation of the rooms functions in a similar way. Natural induction systems are common in the country. It is not surprising that outside blocks of air conditioners are made in the way of mentioned boxes. They are installed on the roof or on the step of foundation. It is noticeable: the power in the outer unit is local, here in the wall built in a power panel, sealed cover, where the wires are pulled, grounding is also local.

It is known that external and internal blocks of air conditioner are connected by two freon lines, drainage pipe and power wires. In the described case it is different. Where is the drain. no one knows, it is better to wind up not on the head of passersby, but in the sewer (as is customary over the sea). As for the electrics, here comes only the signal cable control relay. It is convenient for laying the system. Otherwise there is not much difference: next to each other there are insulated thick and thin tubes for freon. There is no heating cable for obvious reasons. This applies to the drainage system. In winter water becomes ice, makes plug in the tube, and interferes with normal operation of drainage equipment.

According to the mentioned circumstances the cable is laid. Note, the drain line is isolated from the freon line. Split systems known in Russia are widespread in Asia, but without taking into account the absence of frost. It becomes clear why a number of tricks are required to work in winter and for heating, which are absent in standard split-systems:

Every motorist knows that a different oil is used in the winter. You understandably can’t put new grease in the air conditioner, or you’ll have to recharge the freon. In general, air conditioners (split systems), in our opinion, look cumbersome today.

The simplicity of the external HVAC unit is remarkable: 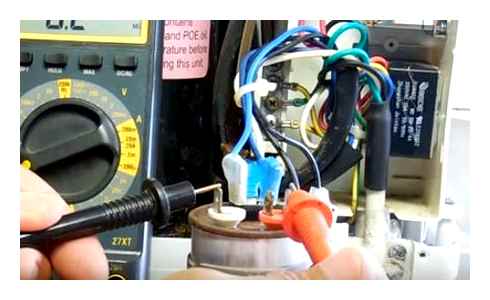 It looks confusing on the outside, but there is nothing complicated about it! Compressor and fan motors are similar, each one carries 4 windings on the stator, the rotor has two poles. The voltage of two windings comes from the mains, for two is shifted by a capacitor by 90 degrees.

See also  Ironing system Laurastar how to use

A rotating field is formed inside. Think of it like an induction motor with two windings. Often one coil is a starter, and here it runs continuously. The contactor is controlled by the signal of the thermostat in the house. Electromagnetic relay actuated by a 26 V AC signal. Breakage is on the first wire, the second one goes inside freely.

To complete the story about the wiring diagram, note that the local power comes through the protective device: 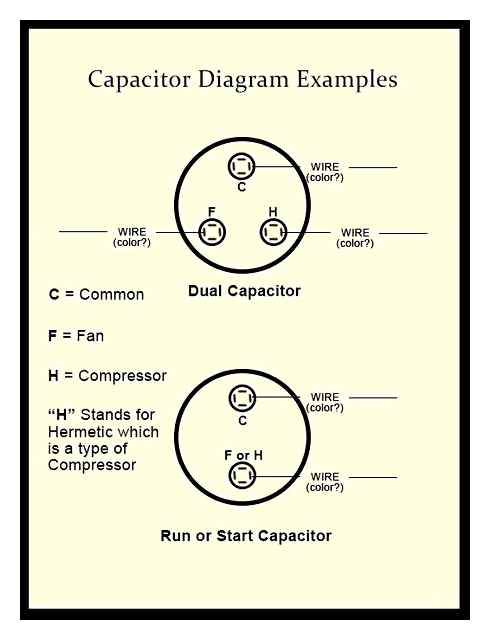 Before starting the repair, the circuit is cut off. Remove cover from panel and de-energize external unit of split HVAC system.

The lid and walls of the “cube” are equipped with a large number of slots and openings. This will ensure the free flow and outflow of air. Rain falls freely inside, radiator can be cleaned with a hose. The fan is attached to the cover with four heavy-duty bolts. Do not remove unnecessarily, just unscrew the bolts around the perimeter of the top edge and remove at the same time. Preliminarily release the three wires mentioned above:

How to find out the condenser of HVAC split system outdoor unit. It is a big cylinder, it is impossible not to notice. Wires are attached to the plastic tape, it is required to cut, and after repair to replace with a new one. Lid with fan and slant of wires is set aside.

On the bottom of the cube there is a compressor just like in the refrigerator. Thick tube conducts freon in gas phase, thin tube. in liquid phase. Behind the compressor is a condenser. Coil covers two walls of the cube completely, partially the other two. Tolerates a break only at the bevel where the condenser and relay with wires are located on the outside. The coil tube is copper, the radiator is steel or aluminum and will rot quickly in the rain.

After the condenser is a filter-drier which does not allow an ice plug to form on a capillary pipe going inside the house. Ingenious and simple. The filter drier needs to be replaced periodically.

A fan mounted horizontally on the lid works as an exhaust fan. Air comes in from outside through the condenser, washes over the compressor and comes out upwards to the outside. The compressor presses freon into the coil, it is compressed and transitions to a different aggregate state. Fluid easily gives off its temperature through the aluminum radiator and rushes through the filter-drier into the building.

See advantages and disadvantages. The design is ideal for warm climates, but snowdrifts or ice on the enclosure grills interfere with normal operation. Such devices in our climate should be placed in the attic (taking into consideration insulation and frost resistance of building materials). In the latter case, even in winter they will be able to work on heating for a while. In traditional split systems, the four-way valve that switches the mode is in the external unit, but it is possible to place it in a convenient place. The described unit is not afraid of water which is a big plus.