Skip to content
BOVISKOALA.COM
Home Washing machines How to Change the Bearing on an Indexit Washing Machine

Bearing replacement for Indesit models WISL 82, WISL 102, WISL 105 X, IWSD 5085 and others is carried out according to the general algorithm. The only difference may be in the order of opening the tank. In appliances of this brand both dismountable and one-piece element is installed. In the first case, to get to the bearing will be simple, you just need to disconnect the fasteners of the tank. If the washing machine is equipped with a non-disassembled element, the plastic cloth will have to be sawed and then re-glue both parts.

First you need to remove the top cover from the unit. It is easy to do, unscrewing the two screws on the back of the washing machine and gently sliding the cover back a little. Then it must be lifted and removed from its support. In some Indesit models the lid is additionally held by plastic catches at the front. If there are any, use a hammer and tap lightly away from you to loosen the cover from the latches.

Before removing the top cover remove the self-tapping screws

Next remove the back panel. To do this, unscrew the 6 self-tapping screws on it, after which the panel should detach without excessive force. Behind it you will see the motor, but it will need to be disconnected at the end of the disassembly. If the machine is equipped with a drive belt, it should be removed at this stage so that it does not interfere with further action.

Then proceed to disconnect the dashboard. First you need to remove the powder collector by pressing the latch inside the element. In the hopper free compartment, unscrew the bolts that secure the dashboard and remove it from its holders. Connecting wires need to be removed and put the completely separated part aside so as not to damage it in the process.

After removing the dashboard, all the parts on the top must be removed. These include the concrete counterweight, the spigot between the tank and the powder compartment, the pressostat and the water valve, and their contacts.

On the bottom back side you need to disconnect electric motor and heating element, shock absorbers, drainage tube and counterweight from the case. To remove the motor from the machine, disconnect the power supply and ground wire, and then unscrew the bolts that fasten the element. Disconnect the heating element wiring in the same way.

With a pair of pliers, remove the clamp and disconnect the drainage pipe from the pump. It is advisable to unscrew the filter before doing so. To release the shock absorbers from the mounts, you need to unscrew the nuts on the left and right side. When all the elements have been removed, make sure that nothing is holding the tank down and proceed to dismantle it. Then unscrew the pulley, using a hexagon socket wrench of the “star” size T40. Loosen it by loosening the bolt little by little. If it is not easy to do, use WD-40 to soften it.

See also  What are the bearings in a washing machine Samsung

Next it is necessary to disassemble the dismantled tank. To get to the drum and bearings. In a collapsible tank, it is enough to unscrew all the bolts around the circumference and gently disengage the two parts. The solid part should be sawed in half at the joint, using a metal saw or an angle grinder. Preliminarily along the perimeter of the tank you need to drill holes, the distance between which should not be more than 4-5 cm. This manipulation is necessary in order to assemble the tank and fix it with bolts at the end of the work.

Then unscrew the bolts that secure the tank to the drum. Unfasten the retaining clips and remove the plastic tank walls. Then you can proceed directly to the replacement of the bearing on the drum of the washing machine Indesit. The procedure is carried out in the following order:

Do not forget to treat the bearings with grease

Replacing bearings is a laborious and time-consuming process, but doing it yourself can save on service center services. We hope that our article will be helpful to you.

How the bearing works?

In the standard assembly, there are two bearings inside the washing machine that connect the drum and pulley.

These parts have different sizes, the large bearing is located near the drum and has a fairly high load.

The smaller bearing is on the opposite end of the shaft.

With the operation of the bearings, the drum of the washing machine rotates evenly when performing the program and additional functions.

Causes of Wear and Tear

If you have had exactly the breakdown, that is, not even 5 years from the date of purchase, it is most likely due to the reason:

Also, you can spin the drum, if you see play between the drum and the tank, then you should be alert.

When bearings deteriorate, it is most likely that the oil seals have also deteriorated, so water begins to leak through the above-mentioned bearing unit. Often, though, the opposite situation occurs. Because of the fact that the glands fail, this unit and water penetrates, and then malfunctions with the bearings already arise. Extremely rare, but it also happens that the drum rubs holes in the tank, after which it is impossible to make any repairs at all.

How to Change Bearings in an Indesit Washing Machine? For this purpose it is necessary to have strong nerves, a sufficient amount of time and at least a little experience in this sphere of activity. It should be said that if you give the washing machine for repair in connection with this malfunction, then there you will take quite a decent amount of money, although in fact the repair is not complicated. Washing machine bearing and packing replacement can be done with your own hands.

The beginning of the work to replace the bearing for an indesit washing machine, always begins the same way with the removal of the top cover. At the back remove the two screws that hold it and carefully pry the top cover of the washing machine forward.

We remove the top cover of the washing machine from the housing, set it aside and proceed to the back. Here it is necessary to unscrew all the fastening screws, and then remove the back panel and also set it aside.

Similarly proceed with the front panel of the washing machine indesit, but here the disassembly will take more time:

In an Indesit washing machine, replacing the bearing is not an easy task. However, you can change this part yourself, if you prepare in advance. Of course, you must first determine that the fault is in the worn or damaged bearings. This is not difficult to discern if you are attentive. 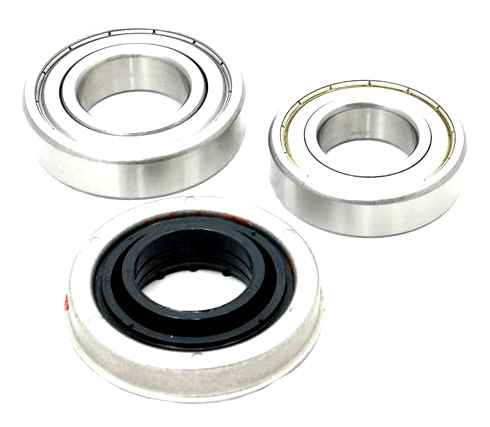 It is necessary to pay attention to the bearings if the washing device makes a noise, hums and rattles. And the unit makes excessively loud noises when spinning mode. The behavior of the drum is also a clue that the bearing is involved. It is enough to twist it away from yourself to feel the presence of play. Visually, you can also notice the skewness of the drum.

If the water leaks and there are no problems with the sealing cuff on the door, the bearing problem is immediately visible. Also alarming should be various extraneous sounds coming from the drum of the washing machine.

How to Change a Bearing in an Indesit Washing Machine?

Technique began to publish an unusual loud noise and play in the spin mode grinding? The problem has been found it is time to replace the bearing in the Indesit washing machine. This item is able to work properly for a long time. Improperly installed equipment or corrosion buildup can contribute to premature wear. It is important to eliminate the problem in time, otherwise it will entail more serious breakdowns, but already other parts.

Variety and design of oil seals

Each model requires an individual selection, since the seals are very different. Therefore, it is advisable to buy a part after disassembling the appliance and removing the old part. Table 1 shows the parameters of seals for washing machines of different brands.

See also  How to Clean a Washing Machine Tray

Not sure where to buy the best bearings for your washing machine?

Manufacturers offer two kinds of bearings. We are talking about plastic and metal products. the first variant is characterized by improved performance. It is achieved due to the presence of a polymer layer. It gives the balls inside them extra protection.But the cost of metal counterparts more affordable.

But in our store you will not have such difficulties. Professional team of consultants is at your service. Their experience and knowledge will help you make the right decision in any situation. You do not know which bearings are best for your washing machine and what kind of bearings to choose? No problem.

What bearings are there??

Many variants of Indesit washing machines at low prices, such as WISL 105 X, WISL 85, IWSD 5085 and others have a one-piece detachable tank in their design. This circumstance greatly complicates the process of replacing the bearing mechanism. It is much easier to reach it on models with a collapsible tank.

Owners of washing machines with one-piece tanks are often offered, instead of repairing the bearing mechanism, to make a complete replacement of the tank, but this radical step is not necessary. Repair of the one-piece tank is best entrusted to the specialists of the service center, which after replacing the bearing performs gluing of the tank. As for a machine with a collapsible tank. to replace the bearing you can try on their own. Before beginning work, it is worth correctly selecting a bearing for an Indesit washing machine. Different models of machines have in their design certain serial numbers of bearings:

Bearings are also selected on the basis of the volume of the machine tank. for 3.5 or 5 kg of laundry. Besides, you need gaskets for repair, they are available in sizes 22х40х10 mm, 30х52х10 mm or 25х47х10 mm. Washing machines of modern release have plastic or metal bearings. Models made of metal are most often used, but the plastic ones are considered reliable, as they are equipped with a protective cover against dust.

According to the reviews of household appliance masters, machines with plastic bearing mechanisms last somewhat longer than their metal counterparts. over, models with plastic bearings are a little more expensive than machines with a metal mechanism. To perform a quality repair of the washing machine drum bearing, it is important to use original spare parts that are suitable for Indesit models. To be replaced by 1 or 2 bearings, as well as the gland.

It is necessary to change all these elements at once. 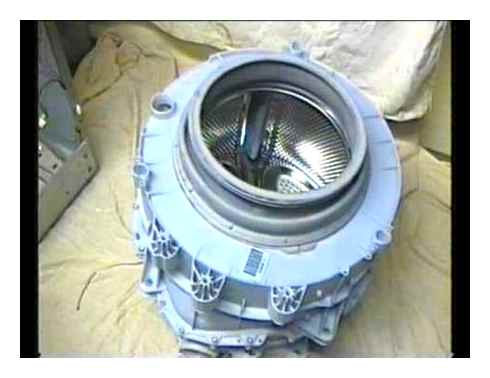