Skip to content
BOVISKOALA.COM
Home Small appliances How to bleed the air from the radiator

There is no question about the air inside the radiators when the heating elements are newly installed or have undergone major repairs. It is more difficult to find out where does the air jamming come from during intensive operation of the system? The reason is often due to mistakes in installation or operation.

If you cover all cases of the problem, the air in the heating appears for the following reasons:

Exactly what caused the air inside the battery is difficult to figure out. However, knowing them, it is worth taking measures in advance to reduce the likelihood of blowing the heating.

How to bleed air from the batteries

In houses and apartments, the old heating systems are next to the modern ones, in some places are installed batteries, equipped with air vent systems, while in other places there are still cast-iron structures without them. That is why understanding how to bleed air from radiators of this or that design sometimes seems to be a difficult task. As a rule, consider several ways to carry out preventive work.

In a heating system with natural circulation, in which the distribution of pipes is at the top of the system, the air lock is removed through the storage tank, also located at the highest point. Such systems, as less stable, fall by the wayside. They are replaced by systems with forced circulation, which require air venting. They are installed on aluminum and bimetallic radiators. This is correct due to the fact that in contact with these materials with the coolant will certainly emit hydrogen, which must be removed.

You can let the air out of old cast iron radiators with the help of a plumber from the housing cooperative (see the “Plumbing” section). Resolution of the Ministry of Public Buildings of 27.09.03 г.). However, in reality, plumbers rarely help to deflate.

In their homes, owners let the air out of the radiators themselves. There are handymen who independently install cocks on them in order to make it easier to bleed out the air. To bleed the air from the cast iron radiator is possible in the following way.

If the house is heated individually the boiler must first be switched off. If you need to deflate the radiator in the apartment, you must tighten the distribution valve on the riser. Now a long hose is inserted into the hole in the radiator, stretched to the sewer.

Advice. We recommend that you prepare a basin (under the radiator) and dry rags in advance. к. There will be a lot of water.

After that you need to remove the plug, which can be a difficult task because of the dried around it the oil paint and applied oakum. To simplify this process, you can use a special lubricant. At this stage you will need a wrench.

See also  What dishes can be placed in the oven

Council. If even with the grease plug can not be unscrewed, you must dissolve the paint kerosene (it takes about 20 minutes).

Finally, you need to wrap the plug with FUM tape, attach it.

Whether or not to deflate the radiator is up to the owner. However, we still recommend that you learn how to do this in order to control the operation of the heating system. Release the air from the radiator is actually not difficult, it is important to follow the technology of this process.

How to bleed air from the battery. ways

Forced-type heating systems are equipped in the upper part with a special valve to release air from the heating system. In this case, an important condition for the possibility of this procedure is to have a certain angle of placement of the supply pipe in relation to the flow of the coolant. This will allow air accumulations rising with the water to escape through special holes.

It is important to know how to deflate the air from the radiator and what to use for this. Currently, manual and automatic devices to combat airlocks are very popular. The features of manual devices (refers to Maevsky cocks) are compact and reliable. It should be noted that before you deflate the battery in the apartment, you need to wait until the coolant cools down completely.

It is one thing if the problem can only be solved from your own apartment or by contacting specialists. Another thing is if the role of a specialist can be played by yourself, for example by gaining access to the basement.

The solution to the problem in this case is as follows:

Individual risers with which problems have arisen, it is also quite possible to skip from the basement level. To do this, just close the valve of one of the connected risers and open the discharge. The probability of successful bleeding air in this case is high enough, and if one of the standpipes is used as an idle, the work necessarily crowned with success.

Even if there are plugs instead of drains on the risers, there are a couple of ways to get rid of the air lock in the heating system:

How to Bleed Air Out of Your Car’s Cooling System. DIY Method

How to deflate a radiator correctly. theory and practice

If the radiators remain cold or barely warm in the fall and winter season, most likely the heating system is bled. In any case, for the owner of the property will not be superfluous information, how to deflate the air from the heating batteries, to avoid situations when the functioning of the equipment is ineffective.

See also  How to disassemble the refrigerator radiator on copper

Experts advise: before you start the heating system in operation, it must be properly prepared. If in apartment buildings this procedure is performed by employees of public utilities, the owners of the private sector have to provide themselves with heat on their own.

How to bleed the boiler

If during the installation of the heating system masters were lazy and did not install a special valve on the radiator, then you yourself will have to perform a simple procedure to release the air from the battery, but in a slightly different way.

To do this you need to have a gas or adjustable wrench, with which you start to unscrew the plug very slowly. If the screw plug on the cast-iron radiator remains unscrewed, apply thread lubricant directly to the threads and try again after a while.

In private houses with a separate heating system sometimes you need to drain the water with the help of an expansion tank, which is always at the highest point of the heating system.

After the water has been drained wait a while and then unscrew the stopper from the expansion tank. Almost always the plug exits on its own when the radiator temperature rises. If these actions have not led to the desired result, bring the water in the heating system to boiling point and then the air lock will certainly be released.

If the actual slope of the pipe differs from the designed one or if the pipe makes a loop, then you have to install additional air vent valves.

Modern manufacturers of heating radiators are sometimes not very conscientious in their production, and as a result, we get a low-quality radiator, which can bring an additional headache. And all because no matter how much air you bleed from the battery that is not made according to standards, the air in it will be infinite. Because the radiator material itself promotes the formation of gases. This problem has only one solution. buy a new quality radiator.

If you prefer the format of the video instructions. watch the clip below. There everything is shown step by step.

We hope that the material was useful to you. Please click the social media buttons below.

Have a warm and leak free home!

Often in the first days after the start of the heating system operation it is found that some batteries are not working at their full capacity. The cause of this can be aeration of the elements. Solving this problem in apartment buildings is the task of employees of housing and communal services. But they do not always do it in good faith. And in private homes troubleshooting falls entirely on the shoulders of the owners. Consider how to deflate the air from the battery yourself.

Before we figure out how to deflate the air from the heating system, let’s understand why it accumulates there. The main reasons:

See also  How to calculate the heating radiator on the room

In addition, poor quality of the radiator can lead to air accumulation. They are affordable and have high thermal conductivity. But the metal actively reacts with water, resulting in the release of hydrogen gas. The problem of rapid corrosion is partially solved by the film coated on the inside of aluminum, but it disappears over time. A more reliable, durable and expensive option. bimetal batteries, in which aluminum is combined with steel, which is not affected by water.

As a rule, the problem of how to unbloat the radiators, face residents on the upper floors in apartment buildings. When heated, the oxygen dissolved in the water rises up, forming plugs. In private homes with an open heating system, air bubbles escape freely through the expansion tank at the top of the system, so air usually does not accumulate, except in some cases. 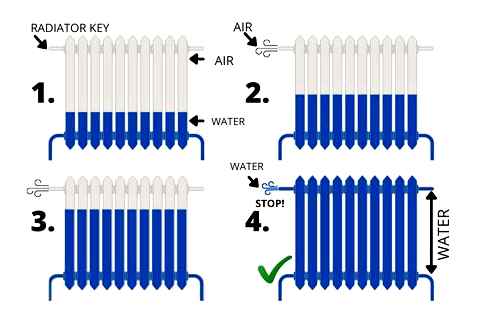 Cause of heater leakage in the heating system

In solving the problem of how to remove air from the heating system, it is useful to study the causes of air puffs, the main ones: